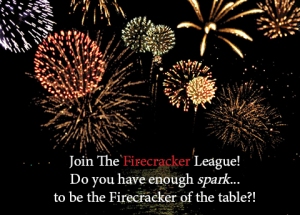 What: Pure Pong is starting another Table Tennis league for novice through advanced level players (up to 1900 USATT rating).  Players will be placed on a table each league night that is appropriate to their skill level; generally, beginners play beginners, intermediates play intermediates, advanced play advanced. Each player plays three to five singles matches per night in a round robin format. If you are The Firecracker of the Table for the night (player with the best results), you advance up to the next table the following week. If you finish at the bottom of the table, you go down a table level the next week.  Players will play a lot of matches with many different players in this format. Wild Cards or Walk-ins (players not officially signed up in the league) may also play in the league on any given night. They will pay an additional fee that registered players don’t pay. These Wild Cards or walk-ins add some spark to the mix to the Firecracker league format. This is an opportunity to play a lot of different players, many different styles, and a good range of ratings!

Who:  Open to all novice-intermediate level players (under 1900 USATT level)

Where:  Pure Pong in the Pearl 1315 NW Overton, Portland

League fees are non-refundable and non-transferable to the next league. Wild Cards or Walk-in players competing in the league will be charged $10 per night.

Further information about details, rules, and procedures of the league will be discussed at the beginning of the first league night: Tuesday, June 10, OR, inquire anytime before the league starts. Jeff Mason, U.S. National Table Tennis Coach will assess players’ level for eligibility and give an estimated provisional rating.

Play with us every day of the week! Read more →